Kennedy Wild Bird Food Guide to the the Chaffinch

The chaffinch is one of Britain’s most common birds and can also be found across Europe, Siberia and occasionally along Northern Africa!

Only a small bird, the male can be easily spotted due to its colourful markings of grey, red, brown and white. The females, however, like many species of bird, are a duller, brown shade, but still, have the distinctive chaffinch white markings on the wings.

Now you know a little bit more about the chaffinch, but what does it look like? Below you can clearly see the difference between both the male and the female of the species.

Both sexes have the same white and brown pattern along the wings and tail, as well as the same shaped head and beak. Like many birds, the male is more colourful and eye catching, so is easier to spot when out birdwatching! 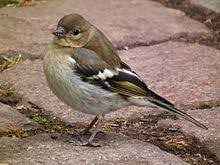 What does the chaffinch eat?

Chaffinches often like to band together when feeding and are usually seen in wide open spaces, feeding on seeds on the ground. This is why we highly recommend our Superior Finch mixture for the winter months!

However, during breeding season, they prefer to go for small insects, such as caterpillars or flying bugs mid air! They are also partial to earwigs and spiders found on the trees of their nests, helping them feed their young a wholesome and nutritious diet. Between the breeding months of April-June, why not stock up on some of our Dried Mealworm

Want to stock up on supplies to entice these pretty little feathered friends to your garden? Head over to our store to take a look at our wild bird food mixes and accessories!

If you’re also wondering what a chaffinch sounds like, its call is fairly repetitive and often described as ‘shrill’. Starting in short bursts and ending in lower tones, it’s distinctive and easily heard over other breeds.

Where can you spot them?

If you really want to spot this bird in abundance, then it’s best to head up to Scotland! In March 2017, the chaffinch was named as Scotland’s most common bird, so taking a trip to the Scottish countryside will be just the ticket for passionate chaffinch spotters.

Spotted a chaffinch and want to document your findings? Make sure you log your sighting on our BirdSpotter and share your chaffinch spotting tips on our forum!

Where do they nest?

You’ll usually spot them nesting from April to June depending on the weather. The females are the primary architects of their nests and like to build them high up in the trees or in enclosed bushes, protected from the elements.

Hatchlings can be spotted by the grey tufts of feathers either side on their heads and also show signs of the chaffinch markings very early on. 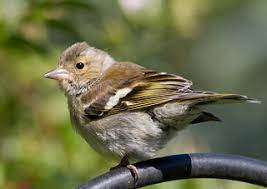